DAY 18 OF ANNOUNCING! Table of Contents for: POP THE CLUTCH: THRILLING TALES OF ROCKABILLY, MONSTERS, AND HOT ROD HORROR

I’ll be posting all contributors here, one-a-day, to reveal the table of contents for the latest anthology that I’ve created: Pop the Clutch: Thrilling Tales of Rockabilly, Monsters, and Hot Rod Horror, published by Dark Moon Books on January 14, 2019! 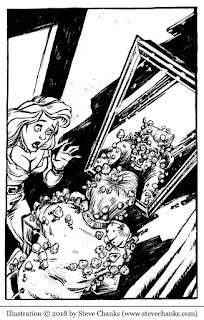 . . . Maddox drummed his fingers on the top on his door, a galloping sound. “You bring Scott’s money with you or was this a wasted trip for me?”
Heath slipped it from his pocket and handed it over. Maddox let the baggie of little green footballs slip from his fingers to the alley, with an “Oops, sorry.” When Heath bent over to pick it up, Maddox levered the door open and banged it into his head. As the frat boy tottered backward holding the top of his skull, Maddox slid out after him.
Six lanky feet of gristle and bone with a pompadour—that was Maddox. When his little brother Hazel and I were still kids, I used to think Maddox was the coolest guy on earth. And I guess he was still up there in my estimation, but now it was more that I admired him for sticking to his guns. He was the last greaser in a world of hippies. Outnumbered 10,000-to-1 by bellbottoms, he wore pegged jeans so tight that, even if someone got in a lucky punch and knocked him out, the jeans might have kept him standing. I never knew how he could even move in them, let alone stash a bicycle chain in his back pocket, but he could, and did . . .


—“ I Was a Teenage Shroom Fiend” by Brian Hodge

Called “a writer of spectacularly unflinching gifts” by no less than Peter Straub, BRIAN HODGE is one of those people who always has to be making something. So far, he’s made thirteen novels, around 130 shorter works, five full-length collections, and one soundtrack album. His novella, “The Same Deep Waters as You,” was recently optioned by a London-based production company for development as a TV series.

He lives in Colorado, where he also likes to make music and photographs; loves everything about organic gardening except the thieving squirrels; and trains in Krav Maga and kickboxing, which are of no use at all against the squirrels.