DAY 15 OF ANNOUNCING! Table of Contents for: POP THE CLUTCH: THRILLING TALES OF ROCKABILLY, MONSTERS, AND HOT ROD HORROR 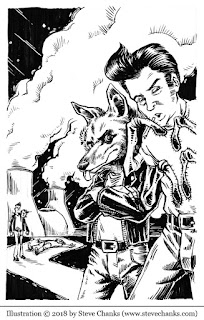 . . . “What do you think you’re doing?” asked the teenager with a high crewcut and grasshopper arms. “This is Doctor Baleful’s territory!”
The kid with the cigarette dangling from his mouth and leaking pustules sneered as the two gangs faced off against each other in the middle of a hot sidewalk. “Says who?”
“What do you mean, ‘says who’?” asked Grasshopper Boy, who’d tried desperately but unsuccessfully to acquire the nickname ‘Grasshopper Man’ instead. “Everybody knows this is Baleful turf. If I were you, I’d take my buddies and scram.”
The three other lab experiments behind Grasshopper Boy stepped forward in a group display of leather-jacketed menace.
“I don’t see Baleful’s name on this street,” said the kid with the oozing pustules. “You see his name, Danny?”
“Nope,” said a kid with seven eyes, three of which were on his face, hidden behind dark sunglasses.
“You see his name, Alan?”
“Nope,” said a kid who would have been short even if his body wasn’t missing from the waist down.
“You see his name, Harold?”
“Nope,” said a kid with the arms of a praying mantis coming through his sleeveless letterman jacket.
“Gee, none of my associates see Doctor Baleful’s name on this street,” said the kid with the pustules. “As far as I’m concerned, that makes this Doctor Awry’s turf.” . . .
—“Lab Experiment Turf War” by Jeff Strand

JEFF STRAND is the author of over forty books, including Pressure, Dweller, and Wolf Hunt. He has never participated in a street race to impress the girl of his dreams, nor has he ever said “Daddy-O” except in an ironic manner, nor has he ever worn a black leather jacket, even that one year at Halloween when he went as a ’50s greaser. All he really did was roll up a pack of cigarettes in the shoulder of a white t-shirt. You can visit his website at www.jeffstrand.com, but he doesn’t even own a switchblade so it’s okay if you don’t.