Upon a Twice Time (Air and Nothingness Press)
http://aanpress.com/UaTT2021_submission.pdf
Payment: 8 cents a word
Story Length: 1,000–3,000 words
Deadline: February 28, 2021
Reprints?: No
Response: March 31, 2021
Description: New interpretations of fairy tales for modern audiences; select two fairy tales, as well as a genre style, and create a new tale. EX: Snow White and the 3 Little Pigs as Detective Noir; or: Little Red Riding Hood and Jack and the Beanstalk as a Grimdark fantasy.


Constelación Magazine
https://www.constelacionmagazine.com/submissions
Payment: 8 cents a word
Story Length: 6,400 words
Deadline: Open 2 weeks, from March 15, 2021–April 1, 2021
Reprints?: No
Response: unknown
Description: Quarterly THEME: Myths and Monsters. Tell us about the myths and monsters that have shaped your perception of the unknown. The theme is open to interpretation, as long as the stories fit under the speculative fiction umbrella. NOTE: Stories are published in English and Spanish. Authors can submit in either language, and the story will be translated for publication in both languages.


Little Blue Marble
https://littlebluemarble.ca/submission-guidelines
Payment: 11 cents a word
Story Length: up to 2,000 (reprints allowed up to 5,000 at <1 cent/ word)
Deadline: Intermittent
Reprints?: No
Response: up to 12 weeks
Description: Speculative fiction that examines humanity’s possible futures living with anthropogenic climate change. We prefer fiction with a hopeful outlook, but the occasional dystopia might fit too.


1986 (anthology from The Dread Machine)
https://www.thedreadmachine.com/submit/submit-anthology
Payment: 8 cents a word
Story Length: 3,000–10,000 words
Deadline: February 25, 2021
Reprints?: No
Response: unknown
Description: Dread-inspiring stories that take place in 1986—either the 1986 of our reality (Stranger Things) or an alternate version (Tales From the Loop). Bring us back to a simpler, scarier time. Let’s make something radical together.


Beneath Ceaseless Skies
http://www.beneath-ceaseless-skies.com/submissions/
Payment: 8 cents a word
Story Length: Up to 15,000 words
Deadline: None at present. Closes intermittently
Reprints?: No
Response: Two to seven weeks
Description: “Literary adventure fantasy”: stories with a secondary-world setting and some traditional or classic fantasy feel, but written with a literary approach. We want stories set in what Tolkien called a “secondary world”: some other world that is different from our own primary world in some way. It could be different in terms of zoology (non-human creatures), ecology (climate), or physical laws (the presence of magic). It could be set on Earth but an Earth different from our primary world in terms of time (the historical past) or history (alternate history). It could have a “pre-tech” level of technology, or steampunk technology, or magic as technology, or anything else that’s not advanced or modern technology. However, the setting should contain some element that is in some way fantastical.

Triangulation (Parsec Ink): Habitats (annual themed anthology)
http://parsecink.com/index.php/triangulation-submissions/
Payment: 3 cents a word
Story Length: up to 5,000 words
Deadline: February 28, 2021
Reprints?: No
Response: April 30, 2021
Description: Theme of sustainable habitats, in tune with their surroundings; show us places we want to live that never existed or that we don’t know ever existed. Past, present, and future domiciles for humans, aliens, and fantasy creatures.


Tales From the Magician’s Skull
https://goodman-games.com/tftms/2020/10/20/announcing-open-call-for-sword-sorcery-fiction-for-tales-from-the-magicians-skull
Payment: 4 cents a word
Story Length: up to 10,000 words (but prefer less than 6,000)
Deadline: April 1, 2021
Reprints?: No
Response: unknown
Description: Sword-and-sorcery, heroic fiction, sword-and-soul, swashbucklers, and the like. Tales of adventure shot through with elements of horror and magic. Give us interesting people doing interesting things for interesting reasons in fascinating places.

Posted by Eric J. Guignard at 8:07 AM No comments:

I prefer reading books in print, but I also listen to audiobooks as a way of coping sitting in traffic during commuting hours for work. So I had this book slated for audio, and then quarantine hit, so I didn’t have to commute, but still listened in the car when I drove “errands,” which means it took over five months to listen to this immense (658-page, or, 22-disk) tome!

First and foremost, this is an amazing book. The complexity and depth of the story is astounding. The literary prowess of David Mitchell is remarkable. It’s a rich, satisfying venture of the imagination. At the same time, there are sections which are mind-numbingly dull, tedious, and often filled with the question of “where is this going?” Those questions were always, ultimately, answered however, so the patient reader is rewarded.

THE BONE CLOCKS is constructed as six related stories (from five different points of view), revolving around the central protagonist, Irish-born Holly Sykes. The book spans her life, beginning during her early teenage years in 1984 and ending in the future of 2043, when she is an elderly woman, during an apocalyptic collapse of Earth’s resources.

Over the course of the book it is slowly revealed that Holly has unwittingly, and inadvertently, become involved in a battle between two warring factions of immortals: one group who reincarnate “naturally” and try to protect humans, and the other faction, which must murder gifted youths and “drink their souls” as a vampiric way to maintain immortality. As horrific and substantial as this central idea may be, it plays very little part for most of the book, appearing only in offsetting “glances” during the course of individuals’ otherwise normal lives. Whenever a human has interaction with one of the immortals, their mind is wiped clean of the event, and they carry on afterward.

This book is certainly a treasure to the right kind of reader, although it may not appeal to everyone. It belongs on the shelves of literary classics that explore the meaning, diversity, and philosophy of life, yet it also contains the supernatural and horror elements that are often so at-odds with literature classics. Author David Mitchell himself includes a humorous anecdote in the book, in which downward-spiraling literary author Crispin Hershey desperately pitches a new book idea to his publicist and talks about adding some mythology to it, and the agent is absolutely horrified that his author may be dipping into the realm of “fantasy,” surely the last vestige of the failed writer.

It’s a somewhat-tragic, somewhat heart-warming ending (without giving anything away), which is more in line with the acceptance of mortality and our own impending doom, when time runs out of our lives on our “Bone Clocks”. 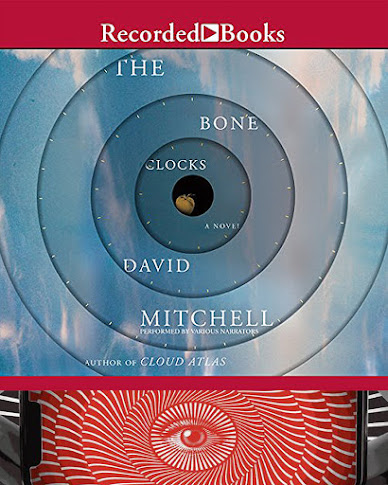 Posted by Eric J. Guignard at 9:40 AM No comments: