Thrilled to share some recent short story publications over the past few months that I’m particularly excited about!

The House of the Rising Sun, which I consider one of my best pieces of fiction writing yet, is for a themed anthology of stories inspired by folk songs. Mine is the eponymously-named The House of the Rising Sun. Edited by New York Times Bestselling Author, Jonathan Maberry, the Table of Contents include a number of other bestselling and amazing authors such as Cherie Priest, Rachel Caine, David Mack, and David J. Schow. 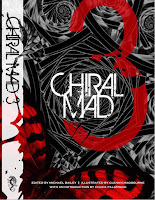 Those Who Watch From On High was purchased and published for Chiral Mad 3, edited by Michael Bailey, and which includes a story reprint by the King of Horror himself, Stephen King!

The Tall Man, was purchased and published for Shock Totem Magazine, Issue #10.

Last Night…, was purchased and published by the gaming giant, CHAOSIUM, inc. for an anthology book in their fiction series, Mark of the Beast: A Collection of Werewolf Stories.

Available for purchase in the anthology book here: Mark of the Beast: A Collection of Werewolf Stories (Chaosium, Inc.)

Momma was purchased and published for Nightscript, Volume 1, edited by C.M. Muller.

All for now, and Midnight Cheers,

Eric J. Guignard’s a writer and editor of dark and speculative fiction, operating from the shadowy outskirts of Los Angeles. He’s won the Bram Stoker Award, been a finalist for the International Thriller Writers Award, and been a multi-nominee of the Pushcart Prize. Outside the glamorous and jet-setting world of indie fiction, he’s a technical writer and college professor. Visit Eric at: www.ericjguignard.com, his blog: www.ericjguignard.blogspot.com, or Twitter: @ericjguignard.