Book Reviews of (fairly) recent publications. Each of the following books may be purchased through any large book store or online through www.amazon.com. 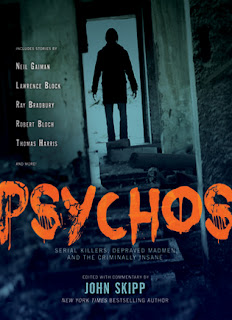 It’s hard to say that new John Skipp anthologies are better than the ones before it, because each of his books are a treasure of fiction stories. So with that being said, if you were a fan of his earlier anthologies, “ZOMBIES” or “WEREWOLVES” or “DEMONS,” this latest, “PSYCHOS,” meets the same level of quality horror and depth of genre you may have found before. It’s another immense collection, clocking in at about 600 pages, oversize trim, and 38 stories, plus introduction and various appendices. As before, the book also covers historic fiction, famous reprints, and plenty of new works by some of the best names in dark fiction, such as Neil Gaimon, Jack Ketchum, Joe R. Lansdale, Steve Rasnic Tem, and Bentley Little. Some of my personal favorite stories in this book include the Stoker-nominated tale, “Righteous,” by Weston Ochse, the seminal “Lucy Comes To Stay,” by Robert Bloch, “The Shallow End of the Pool,” by Adam-Troy Castro, “Damaged Goods,” by Elizabeth Massie, and “The Small Assassin” by Ray Bradbury. 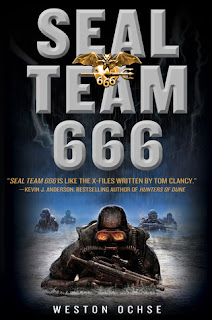 
This is the second full-length Ochse novel I’ve read (after SCARECROW GODS) and thus also the second full-length Ochse novel that I’ve thoroughly enjoyed. Each book is written in a distinctive voice, but SEAL TEAM 666 may be the more appealing to me only because of the subject matter: American SEAL Team special operations that fight against the country’s “Supernatural Enemies.” That’s right... good ol’ American weaponry, firepower, and kickass attitude against demons, monsters, golems, otherworldly possession, and a whole slew of further inhuman forces. The book is fast-paced, gripping, and filled with action as well as a full range of emotions from empathetic sorrow to rapid-fire joking. Great book to escape into for a wild adventure. 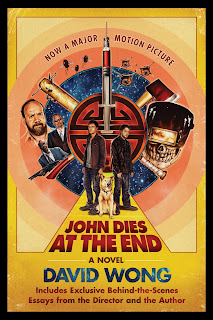 
I was looking for something “different” to read and I found it. John Dies at the End is a hilarious and fascinating take on two slackers who must save the world amidst a backdrop of drugs, aliens, monsters, demons, girls, minimum-wage bosses, and an unbelieving reporter. Totally inappropriate and sometimes immature jokes, but very funny for those with a warped sense of humor. I loved the originality of the book and the voice of the characters. The plot was awesome – just crazy and fast-paced – until about half way through. Then, it began to lull. That was my only problem with the book, is that it just seemed to go on for too long. It didn’t drag, per se – the plot was always moving – but I just had a sense of a story which would never end; just one madcap adventure after the other. It’s like sitting in front of a stand-up comedian hour after hour: for awhile, it’s great and you’re enjoying yourself. But chalk up five or six hours of the same guy’s routine and you just want it to end. So, overall, good book and I recommend it, though it cut have been cut shorter. 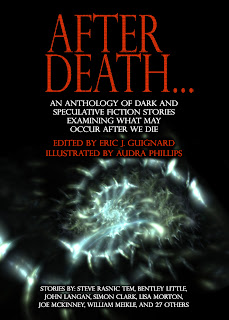 This is my second anthology as an editor, and it is a collection of all-original dark and speculative fiction stories, with accompanying illustrations by Audra Phillips. The contents explore the possibilities of what may occur after we die.

PUBLISHERS WEEKLY says the following about this book:

“What happens when we die? The answers come in the form of 34 stories that explore diverse notions . . . Though the majority of the pieces come from the darker side of the genre, a solid minority are playful, clever, or full of wonder. This strong and well-themed anthology is sure to make readers contemplative even while it creates nightmares.”
http://www.publishersweekly.com/978-0-9885569-2-8

I’m so excited to showcase this publication! Though every parent thinks their child is the cutest, I happen to think this book is one of the best anthologies of new stories available today.

Thanks to all who participated and everyone else who supported this project, including my publisher, STAN SWANSON at DARK MOON BOOKS!

Posted by Eric J. Guignard at 3:58 PM No comments: