Just realized I reached a cool lil’ milestone the other day: I received my 75th short story acceptance! This number includes reprint sales, but still feels quite monumental that seventy-five markets have agreed to publish something I’ve written.

I keep track of every fiction short story submission sent out. As of today, I’ve accumulated 75 acceptances and 254 rejections, giving me a 22.8% acceptance rate. Another 16 stories are slated in the ‘Pending decision’ stacks. And, add to that, my non-fiction articles, interviews, book reviews, blurbs, and introductions, all since I decided to pursue writing in February, 2011!

New spec fiction story I wrote, “Discovery of the Mūsa fugacior”, is published today on “Unsung Stories”!  Check it out here:

Discovery of the Mūsa fugacior


I’ve been hiding for hours, wearing the shadows like cloaks. Watching, just watching. The night is dark as midnight’s reach, and this favors my examination... specimens are less likely to notice my presence.
I must be motionless at the moment of progression, or the mortals may see me in their dying breaths. If that occurs, the soul will spook and flee for the stars. It’s said that at the moment of progression—just before the physical body dies—its vision sharpens, adapting to awareness of our existence. It’s a tenuous transition into the domain of Mortuos, as the dying straddle the lands of dawn and dusk. Those fully alive do not notice us, but if dying mortals catch sight of our presence they may attempt to speak of our existence. Usually, if that should occur, their words are mere gasps and considered only delusional by friends and family wrought with grief. Nevertheless, no researcher wants his specimen aware it is being scrutinized; the results invariably will skew.
With much experience comes patience and facility, and it’s now a rare outing in which I am detected. I slowly adjust the lens of my Anima Viewer to optimal magnification and zoom in.
Like the colorful shells of brilliant scarab beetles, the mortal form gives visual clues to its genus and to the species of the soul encased.
This subject is female. Her exterior is frail with skin wrinkled as wadded fabric, but she is lovely and intriguing, colored of autumn wheat. Wise green eyes flash between exaltation and long-suffering. Observing one who is aged, yet still filled with vitality, is hardly the visage I normally look upon during a death-watch. She has a large crowd of supporters, and I wonder as to her character. There is strength in her appearance and a glow from her aura I have seen in species such as Beloved Parent (Parenti dilectus) or Loyal Friend (Amice fidus), but this is something else.
She may be a species of Artista or, by its common name, the Artist, which happens to be one of my favorite genera. But is it the Uninspired Artist (Artista non inspīrāta), or the Insecure Artist (Artista fragilemque), or the Unknown Artist (Artista obscura), or perhaps that rare breed, the Celebrated Artist (Artista celebre)?
The moment is at hand: Death completes, and the human husk falls away. A pinprick of turquoise luminescence leaps to the air. I must set down my Anima Viewer in order to catch the soul within a collecting jar, careful as always not to touch it. A specimen’s behavior can be affected by direct physical contact....
Story continued at:
http://www.unsungstories.co.uk/short/2015/6/2/discovery-of-the-msa-fugacior
Posted by Eric J. Guignard at 3:12 PM 2 comments: 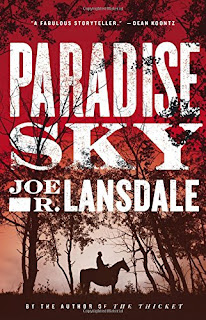 Reading Paradise Sky by Joe R. Lansdale is to immerse oneself in a realm of roughneck, shoot-’em-up western writing where fact and fiction blend effortlessly on the page, and the action is only outgunned by the author’s tilt for beautiful literary prose.

For that’s the thing about Lansdale: His writing keeps you riveted by fleet pacing, bawdy characters, sharp-witted banter, and enough action to stampede a cavalry train, but it’s never cheap, it’s never gratuitous. Instead he fills each page with heartbreak, suspense, hope, and laughter through the lives and situations of his characters. They’re fallible, impassioned, the type of people you could imagine filling your own life, only these characters are ratcheted up tenfold, magnifying the ugliness of their lusts, the shock of their misfortunes, the satisfaction of recompense.

The story goes that Nat Love (AKA Deadwood Dick), a teenage black man, becomes fugitive from a Texas lynch mob after daring to gaze upon the derriere of a white woman in full public view while she’s hanging laundry. Her husband, Sam Ruggert, as vile a relentless zealot as any penned by Melville or McCarthy, dedicates life and resources to hunting down and punishing the ‘uppity’ youth.

Paradise Sky follows the life of Nat as he grows up and searches the country for himself, and pursues love and freedom and adventure. He becomes a buffalo soldier, a gunslinger and trick shot, an associate of Wild Bill Hickok; he befriends many and makes equal number of enemies, all the while looking over his shoulder for Ruggert, who continues to hunt him, set to ruin or kill any good thing that happens in Nat’s life. It’s a long, tragic journey Nat Love travels, and every day seems fraught with tough obstacles and tougher choices.

And, as fantastic as the story is, it’s founded in historic fact. The real Nat Love birthed over a century of Old West mythology as a freed slave turned gunslinger and Indian fighter; his attributed persona, ‘Deadwood Dick’ become the fodder for dime store adventure novels throughout the late 1800s. But what of Nat’s lore really happened or got fictionalized over the years matters less than a man’s chances of quick-drawing on Nat himself; It’s all just good storytelling.

Besides the western genre, Joe R. Lansdale has also successfully written in horror, action, mystery, and suspense, all in formats of novels, short stories, and comics. Fans of Paradise Sky may further enjoy his works of similar tone: The Bottoms (winner of the Edgar Award), The Thicket (one of best historical fiction books of 2013 per Library Journal), and Edge of Dark Water (2012 Booklist Editors' Choice: Adult Books for Young Adults by the American Library Association).

Eric J. Guignard writes, edits, reads, and dreams of dark fiction. His recognitions include winning the 2013 Bram Stoker Award and being a finalist for the 2014 International Thriller Writers Award. Outside the realm of fiction, he’s a technical writer and college professor.

Posted by Eric J. Guignard at 9:16 AM No comments: 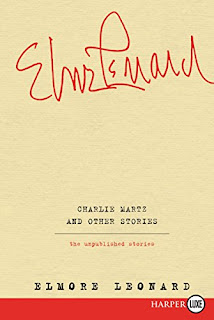 Posted by Eric J. Guignard at 8:34 AM No comments: