DAY 5 OF ANNOUNCING! Table of Contents for: POP THE CLUTCH: THRILLING TALES OF ROCKABILLY, MONSTERS, AND HOT ROD HORROR 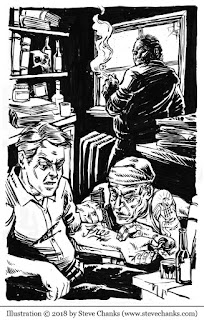 We rode along the dirt road for maybe a half hour until we reached a converted garage with a sign on it: OUTLAWED INK.
“Doesn’t look open,” I said.
“It’s always open,” he said. “Wait here.”
He went to the dilapidated house next to the garage and banged on the screen door. An extremely frail, wrinkled man with a very small bald head—he appeared to be at least ninety years old—came to the door. Nick talked to him for a few minutes. A couple of times the man glanced in my direction, but by the way he was squinting I didn’t know if he could even see me.
Nick returned to the car and said, “Okay, he can take us.”
“He’s the tattoo artist?”
“Yeah, one of the best.”
“I don’t know,” I said.
“Trust me,” Nick said. “I’ve been coming here for years. You won’t be disappointed.”
My instincts told me this was a bad idea, but when had I ever listened to my instincts?
“What the hell,” I said. . . .
—“Outlawed Ink” by Jason Starr

JASON STARR is the international best-selling author of many crime novels and thrillers. He also writes original graphic novels and superhero comics for Marvel and DC and has contributed to numerous short story anthologies. He has won the Barry Award and is a two-time winner of the Anthony Award. Several of his books are in development for TV, film, and theater. His work has been translated into over a dozen languages. His latest novel is the psychological thriller, Fugitive Red. Starr was born and raised in Brooklyn and now lives in Manhattan.