DAY 4 OF ANNOUNCING! Table of Contents for: POP THE CLUTCH: THRILLING TALES OF ROCKABILLY, MONSTERS, AND HOT ROD HORROR 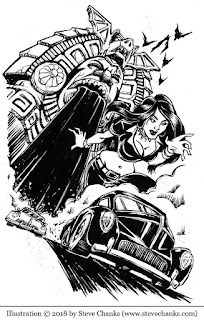 . . . Coles shook his head and finished his beer. Nearby was a mound of junk and, walking toward it, he tossed his can onto the pile. Turning, he encountered the woman in black.
“You are a skilled man,” she said. Her accent was heavy but her words were clear. Like they were being tattooed on his spine.
“Maybe it’s equal parts stupid sometimes,” he countered, careful not to get lost in those depthless eyes of hers. “But winning is good for business.”
“How so?”
“I build custom engines and cars so word gets around when you come in first.”
“And coming in first matters to you?”
“Better than getting kicked in the teeth.”
“Yes, I suppose that is so.”
He made a sound. “I wasn’t being that serious.”
“I see.”
“You’re new around these parts.”
“I’m Ymar, Ymar Montez.” She put out her hand. There was a large jade-and-stone ring on her finger.
They shook hands. “Good to meet you.”
“The pleasure’s all mine, Deacon Coles.”
Those eyes . . .
—“The Demon of the Track” by Gary Phillips

Son of a mechanic and a librarian, weaned on the images of Kirby and Kane in comics and too many reruns of The Twilight Zone, GARY PHILLIPS and his pops once rebuilt a ’58 Ford Fairlane. Since then he has published various novels such as Violent Spring, the first such mystery set in post ’92 civil unrest L.A.; edited several anthologies including The Obama Inheritance: Fifteen Stories of Conspiracy Noir; and published more than sixty short stories. With Christa Faust, he co-wrote a prose adaptation of the classic Batman vs. Joker graphic novel, The Killing Joke.