DAY 3 OF ANNOUNCING! Table of Contents for: POP THE CLUTCH: THRILLING TALES OF ROCKABILLY, MONSTERS, AND HOT ROD HORROR 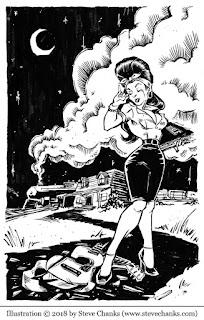 . . . I remember when I first paid true attention to her. She had been there all along, hidden behind a bland misfit mask, but now she was taking on a different look, and that’s why I noticed her. I had a different look too, and it was the music that changed us, that brought us together like a magnet to steel.
I had on my blue jeans with the big cuffs, deep enough you could have kept your lunch money in them, had on a tee-shirt with the short sleeves rolled up to show what biceps I had. In that area, I needed a little work, but listening to the radio, to that hard-driving music, had turned me bold, made me want to look like my heroes. I had my hair slicked back with enough oil to lube a bone-dry Buick transmission, duck tail lifted up in the back, not to mention some wispy sideburns.
There Belinda was, coming down the hallway in her dark teal, half-sleeve swing dress with white fringe at the bottom and on the collar, her flame-red hair, mounded up and flared out wide, the collar fringe swishing across her sun-kissed collar bones, as she walked in men’s lace-up shoes. Instead of a purse, she had a guitar, an old, worn Martin D-45 with a leather strap . . .
—“Tremble” by Kasey Lansdale and Joe R. Lansdale

KASEY LANSDALE, first published at the tender age of eight by Random House, is the author of several short stories and novellas from Harper Collins, Titan Books, and others. She is the editor of assorted anthology collections and in her latest publication, Terror is Our Business, Publishers Weekly noted, “Lansdale’s storytelling delightfully takes on a lighter and sharper edge.” She is best known as a country singer/songwriter whose music has been placed on various television and film networks.

JOE R. LANSDALE is the author of forty-five novels and four hundred shorter works, including stories, essays, reviews, introductions, and magazine articles. His work has been made into films, Bubba Ho-Tep, Cold in July, as well as the acclaimed TV show, Hap and Leonard. He has also had works adapted to Masters of Horror on Showtime, and wrote scripts for Batman: The Animated Series, and Superman: The Animated Series. He scripted a special Jonah Hex animated short, as well as the animated Batman film, Son of Batman.

He has received numerous recognitions for his work. Among them The Edgar, for his crime novel The Bottoms, The Spur, for his historical western Paradise Sky, as well as ten Bram Stoker Awards for his horror work, and has also received the Grandmaster Award and the Lifetime Achievement Award from the Horror Writers Association. He has been recognized for his contributions to comics and is a member of the Texas Institute of Literature, the Texas Literary Hall of Fame, and is Writer in Residence at Stephen F. Austin State University.

His books and stories appear in twenty-five languages.