DAY 8 OF ANNOUNCING! Table of Contents for: POP THE CLUTCH: THRILLING TALES OF ROCKABILLY, MONSTERS, AND HOT ROD HORROR 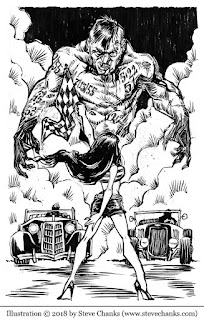 . . . Tool’s heap shambled to a halt in a storm front of track-shoulder dust, but Rodrigo was nowhere to be seen . . . until Breezer saw the big guy filling up the Beast’s driver’s side window, heard him yanking open the door, felt him rousting Breezer out of his ride with one fisted glove.
“You cut Tool off! You cut me off! That f**ker had better die, and I mean it!”
It was track law among Faults, like a commandment: You die, you lose.
Rodrigo’s voice was hot tar and broken glass. He was strong enough and mad enough to hold Breezer aloft one-handed. Breezer’s boots dangled a foot off the ground. Rodrigo’s breath would haze your eyes to tears and make you regret thinking of roadkill. His teeth ran in irregular crags that looked sharpened, maybe filed. One eye was fused almost shut by an old injury. The more visible eye had a huge black iris, like a dog’s. His shredded leathers were smoldering and Breezer could see him bleeding from a dozen fresh wounds. Rodrigo tore off his helmet with his other hand and smashed it down to spin in the gravel with that abrasive bucket sound helmets make. Close-up, Rodrigo’s exposed head seemed twice the size of Breezer’s own, upholstered in thick features, scar tissue, and crimson rage. His hair hadn’t grown back on one side after a previous race. His features had caught a lot of flak, and his skin looked like rubber bacon . . .

DAVID J. SCHOW is an award-winning writer who lives in Los Angeles.

His novels include The Kill Riff, The Shaft, Rock Breaks Scissors Cut, Bullets of Rain, Gun Work, Hunt Among the Killers of Men (part of Hard Case Crime’s “Gabriel Hunt” series), Internecine, Upgunned, and the forthcoming The Big Crush (2019).

His short stories have been regularly selected for over thirty volumes of “Year’s Best” anthologies across three decades and have won the World Fantasy Award, the ultra-rare Dimension Award from Twilight Zone magazine, plus a 2002 International Horror Guild Award for Wild Hairs, his compendium of justly provocative “Raving & Drooling” columns written for Fangoria. The newest of his ten short story collections is a greatest hits anniversary compendium titled DJStories (2018).

DJS has written extensively for film (The Crow, Leatherface: Texas Chainsaw Massacre III, The Hills Run Red) and television (Masters of Horror, Mob City). His nonfiction works include The Art of Drew Struzan (2010) and The Outer Limits at 50 (2014). He can be seen on various DVDs as expert witness or documentarian on everything from Creature from the Black Lagoon to Psycho to I, Robot. Thanks to him, the word “splatterpunk” has been in the Oxford English Dictionary since 2002.