DAY 13 OF ANNOUNCING! Table of Contents for: POP THE CLUTCH: THRILLING TALES OF ROCKABILLY, MONSTERS, AND HOT ROD HORROR 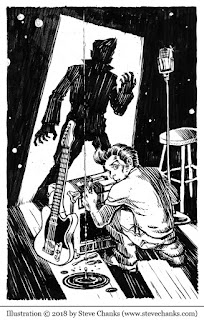 . . . I was careful to turn my back while I ran the cable to the vocal mic, so Dwayne wouldn’t see me smile. He was just as likely to come back on the shitty stage and backhand me for the hell of it as not. Yeah, I’m with the band, but I’m just the road crew and back-up guitar player, if Dwayne hurts his hand fighting, or doesn’t feel like playing any particular night. Most nights, I just stand offstage and watch.
He couldn’t see my smile, but he must have sensed it. “You got somethin’ to say there, Cecil?”
I shook my head. “Not me, boss. I’m just stringing my cable here.”
His voice rose. “My cable, you mean. You get my amp fixed right this time, too. And make sure the Tele is fuc*ing tuned. That high E was flat last night, it threw me off. ”
First off, he was full of shit, because I always had the axe tuned so it was dead-on; second off, he could have turned the tuning peg an eighth and fixed it if it had been flat, but he wasn’t a real musician. Oh, he could sing okay, mostly on-key, honkin’ Elvis or Buddy Holly just fine, but I can out-sing and play circles around him, that’s a fact, too.
“Yessir.”. . .

STEVE PERRY has sold dozens of stories to magazines and anthologies, as well as a considerable number of novels, animated teleplays, non-fiction articles, reviews, and essays, along with a couple of unproduced movie scripts. He wrote for Batman: The Animated Series during its first Emmy-award winning season, and during the second season, one of his scripts was nominated for an Emmy for Outstanding Writing—which no doubt caused the subsequent loss of that award. His novelization of Star Wars: Shadows of the Empire spent ten weeks on The New York Times Bestseller List. He also did the bestselling novelization for the summer blockbuster movie Men in Black, and all of his collaborative novels for Tom Clancy’s Net Force series have made the NY Times Bestseller list. He is a recipient of the Willamette Writers Lifetime Achievement Award. He lives in Oregon with his wife, two Cardigan Corgis, and one ornery cat.


“A fitting tribute to the 1950s with this 18-story compendium of hot rods, rock ’n’ roll, and creature features come to life.” —Publishers Weekly