DAY 7 OF ANNOUNCING! Table of Contents for: POP THE CLUTCH: THRILLING TALES OF ROCKABILLY, MONSTERS, AND HOT ROD HORROR 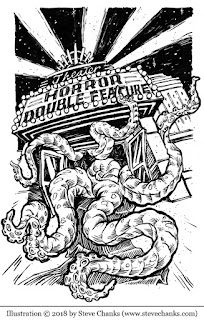 . . . Bobby hired him because he needed another monster picture. He always needs monsters. The studio hasn’t had a bona fide hit since the green guy with the gills. When you’re desperate, you turn to desperate people. People like Marvel Whitehead. Goddamn weirdo.”
We were headed up into the mountains by this point, on our way to the desert. I wondered if I should put the top up. It was already oven-hot.
“I was in the office when Bobby brought him in to pitch. He tried a bunch of bullshit on us. Rampaging insects made of human body parts. A country full of witches. Ghosts who weren’t really dead, and so on. Nothing clicked with Bobby. And then Marvel pulled the old, ‘Well, I do have one more thing, but I don’t know if it would interest you, people have never seen anything like it, I don’t know if audiences could stand it, blah blah blah.’ We both realized all that other bullshit had been a set-up for this big idea he obviously wanted to pitch. So Bobby says, ‘Come on, let’s hear it, already.’”
I side-eyed new girl to see if the warm air had made her drift off to sleep. But no. She was paying close attention to me, hanging on my every word.
“Marvel had an idea for a new kind of monster. One that people in the audience can’t escape, he says. That’s because it actually comes to life and crawls off the screen, he says. . .

DUANE SWIERCZYNSKI is the Edgar-nominated author of ten novels including Revolver, Canary, and the Shamus Award-winning Charlie Hardie series, many of which are in development for film/TV. Duane has also written over 250 comics for Marvel, DC, Dark Horse, Valiant, IDW, and Archie, and collaborated with James Patterson on The House Husband, The Shut-In, and Stingrays, as well as CSI creator Anthony E. Zuiker on the bestselling Level 26 series. Earlier in his career, Duane worked as an editor and writer for Details, Men’s Health, and Philadelphia magazines, and was the editor-in-chief of the Philadelphia City Paper. He now lives in Los Angeles with his wife and children.