DAY 6 OF ANNOUNCING! Table of Contents for: POP THE CLUTCH: THRILLING TALES OF ROCKABILLY, MONSTERS, AND HOT ROD HORROR 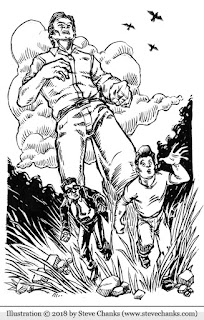 . . . “Listen, Johnny, we don’t have much time,” Flat-top said. “As we feared, your people have exploded their weapon. Your atmosphere will soon grow too toxic for us. We are departing.”
“Okay, so, that’s good, right? For us? That you’re beating feet?”
“I can offer you sanctuary, but you must come back inside our vessel now.”
He reached for Johnny’s arm, but Johnny turned and—
His house—
It had grown, it had to be at least sixty feet high. It reached into the cloudless sky like something from Jack and the Beanstalk. His knees buckled and Flat-top grabbed at him as if to drag him back to the panel.
The porch door swung open with a mighty crash and there stood his own mother, now massive, terrifying, at least fifty feet tall! She scanned the horizon.
“Johnny!” she shouted, and the force of her voice knocked him flat on his back.
“Oh, my gosh, oh, gosh,” Johnny blubbered. “Ma! Ma, down here!” He waved his arms.
She froze and cocked her head. Then she bent over and stared down at him. The pores in her skin were like craters; her eyes were as big as the high school gymnasium . . .
—“We Might Be Giants” by Nancy Holder

NANCY HOLDER is the New York Times bestselling author (the Wicked series, with Debbie Viguié) of over 80 novels and 200 short stories. She has received five Bram Stoker awards, a Scribe award, and a Young Adult Fiction Pioneer Award. She is the former vice president of the Horror Writers Association and currently sits on the HWA board of trustees. A recent work was the novelization of Crimson Peak, the classic gothic film by Guillermo del Toro. Her current ongoing project is the comic book series “Mary Shelley Presents” for Kymera Press, adapting the work of women writers of the supernatural from all over the world. She presents lectures and presentations on Mary Shelley whenever possible. She is on Facebook and Twitter @nancyholder. She lives in Washington state and travels to Italy whenever possible.