DAY 17 OF ANNOUNCING! Table of Contents for: POP THE CLUTCH: THRILLING TALES OF ROCKABILLY, MONSTERS, AND HOT ROD HORROR 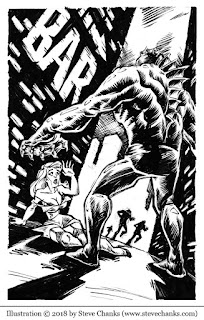 . . . Before Frank noticed someone else was in the room, he’d shoved Julie to the ground and slammed the door behind.
“What the hell do you think—” he began, then stopped short when he saw Phinn rise behind the desk, bristling and clenching his giant hands into fists.
Frank’s jaw fell open. A little gasp escaped, before he composed himself enough to demand, “Who the hell are you?”
“This is my friend, Phinn,” Julie said confidently, standing back up. “I brought him along to make sure you don’t try any funny business. Not that I’m joking, either. Now give me my money, we’ll leave, and you’ll never see us again.”
“’Zat so?” Frank said, his gaze still deadlocked with Phinn’s, even as his knees knocked.
“Yeah,” Julie responded resolutely.
Frank seemed to strain in his efforts not to break, but he lost that brief showdown of wills fast enough against Phinn. Frank went to the wall safe, spun the knob, opened it, and removed a stack of bills, tossing it at Julie with contempt.
“Lucky you caught me in a good mood,” Frank said.
“Yeah, you’re a real jovial Gus.”
“Take your pet monster and that smart mouth and get the hell out of my sight.”. . .


—“ Fish out of Water” by Will Viharo

WILL “THE THRILL” VIHARO is a pulp fiction author, cat daddy, dog walker, and lounge lizard at large. For many years he was the producer and programmer of the cult movie cabaret Thrillville, featuring classic B films in 35mm with live burlesque acts all around the Bay Area and beyond, which he presented with his wife, Monica “Tiki Goddess” Cortes Viharo. Currently he is host and organizer of Noir at the Bar Seattle. His “gonzo grindhouse” novels include A Mermaid Drowns in the Midnight Lounge, Freaks That Carry Your Luggage Up to the Room, Lavender Blonde, Down a Dark Alley, Chumpy Walnut, and Love Stories Are Too Violent For Me. Swing by his cyber pad anytime for virtual cocktails at www.thrillville.net.