DAY 11 OF ANNOUNCING! Table of Contents for: POP THE CLUTCH: THRILLING TALES OF ROCKABILLY, MONSTERS, AND HOT ROD HORROR 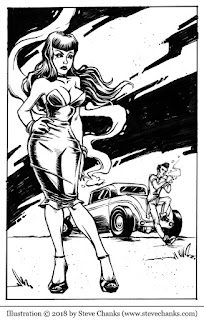 . . . Saturday’s main was the top event in the local racing season. It wasn’t official from the Speedway promoters yet, but rumor had it that the purse for the winner would be five percent of the gate. Any way you hashed that out, it came to two grand or better if there was a full house, and there always was whenever they had a hundred-lapper.
Flint and his Deuce had won two mains already this season, and he intended to win this one too. But it wouldn’t be easy. There were a lot of good drivers entered, Neale and Clements among them, but the stiffest competition was likely to come from Bruno Gianetti.
Gianetti was real good, drove hard and played almost as rough as Flint. Flint had been racing against him off and on for two years now and knew the Deuce was faster than Gianetti’s Dodge on the straightaways if he played it smart; he’d taken him more times than he’d been taken by hanging back, not letting the bugger nose him toward the wall or the infield, then punching out in the stretches. Gianetti was good, all right. But Flint was better. He’d win that two grand prize on Saturday one way or another. . .

A full-time professional writer since 1969, BILL PRONZINI has published more than 80 novels, four nonfiction books, and 350 short stories in a variety of genres; he has also edited or co-edited numerous anthologies. His collection of horror and dark suspense stories, Night Freight (Leisure, 2000), was nominated for a Bram Stoker Award by the Horror Writers Association. In 2008 he was honored as a Grand Master by the Mystery Writers of America, their highest award.