DAY 14 OF ANNOUNCING! Table of Contents for: POP THE CLUTCH: THRILLING TALES OF ROCKABILLY, MONSTERS, AND HOT ROD HORROR 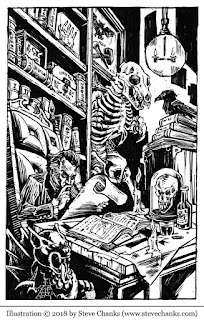 . . . Running as best she could in the dark, in her sandal-type heels, she tried to keep an eye peeled for stray reptiles and that fucking wolf, who, by the splashing sound of it, was now pursuing her. Where the hell was Dan, or anyone else for that matter?
She kicked out of her shoes and flew barefoot over the swampy ground, the back door with the single light bulb dangling over seeming miles away, not thirty yards. The harder she ran, lungs burning, pain searing her bare feet, the louder the growl of her pursuer grew. She didn’t dare risk a look back.
Only ten yards to go. She just might make it—unless tonight was the night Dan finally remembered to lock up the damned back door. But she was so close, the glow of the dim bulb calling to her . . .
Then the monster’s hot breath touched her neck. She looked at that door just a few steps—and a lifetime—away. Her step faltered, yet she pressed forward. The animal’s claws grazed her shoulder, the pain like someone held a torch to her skin.
She stumbled, the beast about to take her down, so close to the door but even if she got there, she’d never get it open in time. Then that door swung open and light poured out, an answered prayer . . .
—“ Mystery Train: An Arcane Investigation” by Max Allan Collins and Matthew V. Clemens

MAX ALLAN COLLINS received the 2017 Grand Master “Edgar” by Mystery Writers of America. The MWA’s Grand Master Award represents the pinnacle of achievement in mystery writing and was established to acknowledge important contributions to this genre, as well as for a body of work that is both significant and of consistent high quality.

He is the author of the Shamus-winning Nathan Heller historical thrillers (Better Dead) and the graphic novel Road to Perdition, basis for the Academy Award-winning film. His innovative ’70s series, Quarry, has been revived by Hard Case Crime (Quarry’s Climax) and became a Cinemax TV series. He has completed ten posthumous Mickey Spillane novels (Killing Town) and is the co-author (with his wife Barbara Collins) of the award-winning Trash ’n’ Treasures comic cozy mystery series, beginning with Antiques Roadkill through the current Antiques Wanted.

MATTHEW V. CLEMENS—A frequent co-conspirator with Max Allan Collins, they have collaborated on twenty-four novels. The pair has also written comic books, graphic novels, jigsaw puzzles, and their short stories were collected in My Lolita Complex and Other Tales of Sex and Violence. They have also appeared in numerous anthologies including Hardboiled Horror, Hollywood & Crime, and Worlds of Edgar Rice Burroughs.

Clemens has also had short stories published in the anthologies Occupied Earth and Killing Malmon. With Pat Gipple, he co-authored the true crime book Dead Water: The Klindt Affair.

You can learn more at www.matthewclemens.com.

PR EORDER NOW FOR THIS AND 17 OTHER TALES OF THRILLING FUN AND IMAGINATION!!


“A fitting tribute to the 1950s with this 18-story compendium of hot rods, rock ’n’ roll, and creature features come to life.” —Publishers Weekly