DAY 12 OF ANNOUNCING! Table of Contents for: POP THE CLUTCH: THRILLING TALES OF ROCKABILLY, MONSTERS, AND HOT ROD HORROR 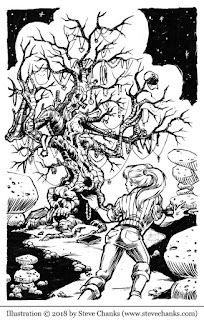 . . . one group was retelling and exaggerating rumors while the other was passing frightening old truths to the next generation . . . truths that should not be ignored. The thought brings Katie back to the present and what she needs to do, so she finally opens her eyes.
The Prom Tree.
It stands in front of a trio of alter-like boulders, hundreds of gnarled, dead branches reaching skyward like paralyzed, white spider legs. Katie stares at it, her impression that it isn’t a tree at all. It’s a bush, withered by drought until it’s nothing but a skeleton of itself. She imagines the biggest branches being hollow, dry wooden veins parched and still somehow searching for life. The idea is terrifying but Katie still takes a step forward, then another. She stops just short of the branches that stab the air, realizing they are actually more black than white. Their ends are agonized kinks that protect the heart of the tree, despite that same essence having abandoned it long ago.
But there is more to protect here. Much more.
Under the relentless Arizona sun, the things hanging on the tree glint. The breeze has disappeared and there are no cars as far as she can see in either direction. The silence is heavy, the air suffocating. Katie wants to do what she has to, but she forces herself to stay put, makes her gaze examine each and every offering in front of her. . .

—“The Prom Tree” by Yvonne Navarro

YVONNE NAVARRO is the author of twenty-three published novels and a lot of short stories, articles, and a reference dictionary. Her most recent published book is Supernatural: The Usual Sacrifices (based in the Supernatural Universe). Her writing has won a bunch of awards and stuff. Lately she’s been really getting into painting and artwork. She lives way down in the southeastern corner of Arizona, about twenty miles from the Mexican border, is married to author Weston Ochse, and dotes on their rescued Great Danes, Ghoulie, The Grimmy Beast, and I Am Groot. They also have a talking, people-loving parakeet named BirdZilla. Instead of a To Do list, she has an I Want To Do list. It has about 4,274 projects on it and won’t stop growing.

“A fitting
tribute to the 1950s with this 18-story compendium of hot rods, rock ’n’ roll, and creature features come to life.” —Publishers Weekly