DAY 2 OF ANNOUNCING! Table of Contents for: POP THE CLUTCH: THRILLING TALES OF ROCKABILLY, MONSTERS, AND HOT ROD HORROR 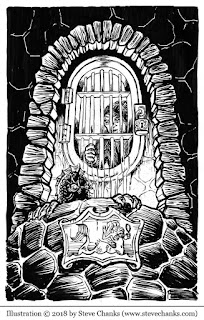 . . . Hemmo slapped his beer down and open-mouth-ogled his war buddy and best friend. “What do you mean the fish spoke to you?”
Hemmo Saarsgaard was an acre tall compared to Doogie and as angular as a pike. They each wore a white t-shirt underneath leather jackets. Blue jeans and combat boots finished their ensemble. Doogie couldn’t help note that they were still in uniform albeit not the same uniform they’d worn in Korea. The difference was that back then they’d been part of something—part of something special. Now they were just—they weren’t part of anything. They were just drifting like every other war-aged man in America back in the Land of the Big PX with no focus and no prospects.
Doogie pushed the ennui aside and stood a little straighter. “Just as I said. It spoke to me.”
“I mean, did its lips move? Did it swim up to you and begin a conversation? I mean, come on, Doogie, you can’t just lead with, Did I tell you what the fish said?”
“It didn’t swim up. I caught it. I just told you. And no, its lips didn’t move. It spoke to me in my head.”. . .
—“ Sea Lords of the Columbia” by Weston Ochse

WESTON OCHSE is the author of more than twenty books. His work has appeared in various anthologies and magazines, including The Tampa Review, Vol. 1 Brooklyn, Soldier of Fortune, IDW, and DC Comics. His work has also been a finalist for the Bram Stoker Award five times and he’s been honored to have won the Bram Stoker Award for First Novel. He’s recently worked on several franchises, including Aliens, Predator, Hellboy, Clive Barker’s Midian, V-Wars, Joe Ledger, and X-Files. He splits his time between Arizona and Oregon and absolutely loves the outdoors. When he’s not writing, you can find him hiking, running, fly fishing, or just fusting about.