DAY 1 OF ANNOUNCING! Table of Contents for: POP THE CLUTCH: THRILLING TALES OF ROCKABILLY, MONSTERS, AND HOT ROD HORROR 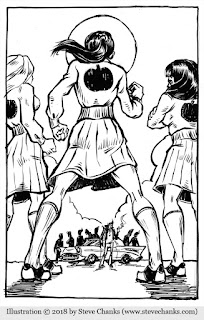 . . . The Fighting Pumpkins cheerleaders took up their usual position along the wall. Iris produced a pack of cigarettes. About half the girls took one, while the other half brushed their hair, or checked their lipstick, or did any one of a dozen other things that signaled “too cool to be in class, yet still too cool for you” to anyone who happened to wander by. Andrea waved off the cigarette she was offered, choosing instead to rest her shoulders against the wall and watch the others with a possessive predator’s eye.
These were her Pumpkins. They wouldn’t be hers forever, would move on to the protectorates of other monsters, other ideal lives, but for now, for the moment, they belonged entirely to her. She didn’t have to share if she didn’t want to, and upon careful consideration, she found that she didn’t want to.
Which was why it was such a problem when the hot rod roared up on the narrow stretch of asphalt behind the auto shop and the boy in the black leather jacket leaned out the window, grabbed Iris around the waist, and hauled her, shrieking, into the car . . .

—“The Golden Girls of Fall” by Seanan McGuire

SEANAN MCGUIRE lives, works, and watches way too many horror movies in the Pacific Northwest, where she shares her home with her two enormous blue cats, a ridiculous number of books, and a large collection of creepy dolls. Seanan does not sleep much, publishing an average of four books a year under both her own name and the pen name Mira Grant. Her first book, Rosemary and Rue, was released in September 2009, and she hasn’t stopped running since. When not writing, Seanan enjoys Disney Parks, horror movies, and looking winsomely at Marvel editorials as she tries to convince them to let her write for the X-Men. Keep up with Seanan at www.seananmcguire.com, on Twitter as @seananmcguire, or by walking into a cornfield at night and calling the secret, hidden name of the Great Pumpkin to the moon. When you turn, she will be there. She will always have been there.