From the editors of OCCULT DETECTIVE QUARTERLY magazine comes a companion anthology for more and greater thrills and chills in the realm of occult detectives! These are stories that were too long for the mag, verging on novellas or novelettes each, and in this case, more is better. 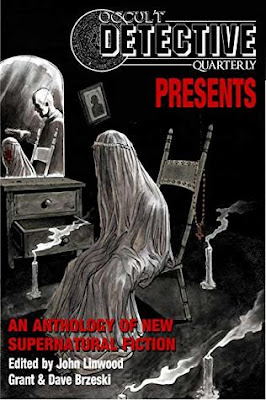 Having recently just read WEIRD DETECTIVES: RECENT INVESTIGATIONS anthology (edited by Paula Guran), I happened to be looking for a source of further such stories and OCCULT DETECTIVE QUARTERLY most definitely fits the bill. Including eight original fiction stories as  well as a thoughtful in-depth 30+ page essay on the history of occult detectives, “Fighters of Fear” by Mike Ashley, and all magnificently illustrated by a selection of extremely talented artists, this anthology is a treat for fans of paranormal thrillers and crime fiction alike.

All of the stories in this book were good in their own ways, although a few stood out to me most, either to my own tastes or by the prose or subject matter. Notably, Willie Meikle and Edward M. Erdelac are both treasures of short story talent and nailed it with their tales. I’ve never read a Meikle story I didn’t like, and this one kept that stat going with “Farside,” the case of a stalker who comes by way of mirrors. The prize of the anthology however has to go to Ed Erdelac with “Conquer Comes Correct” in which a Kung Fu Vietnam Veteran takes down a practitioner of black magic.

Also most enjoyable was “Lazarus Come Forth!” by Robert Pohle a mournful tale contrasting religion and magic, set in ancient Palestine; and “A Shadow Against the Stars” by Charles R. Rutledge, wherein accompanied by a 12,000-year-old barbarian, Det. Jennifer Grail has her work cut out for her as she investigates a case where bodies mysteriously fall from the sky.

A great read throughout and well recommended.

Available for sale on Amazon here

Email ThisBlogThis!Share to TwitterShare to FacebookShare to Pinterest
Labels: Reviews