D.O.A. III Available, and it's Awesome!

Received my contributor’s copy yesterday for the latest anthology I’m in D.O.A. III (May, 2017 by Blood Bound Books! Edited by Marc Ciccarone and Andrea Dawn, I am STOKED to be part of this alongside some of my horror idols! My own story is “RITCHIE,” a murdered high school bully who keeps coming back annually to get revenge on the victim who killed him.

Notches by Sean Eads and Joshua Viola
The Broken Hearted by T. Fox Dunham
N Word by Shane McKenzie
Skipp’s Splatterpunk Alphabet Souffle by John Skipp
Takeaway Night by T.M. McLean
Burnt by Lucian Marano
Junk by Ryan Harding
The Package by Kristopher Rufty
Red by Richard Christian Matheson
8 out of 10 by Daniel I. Russell
Posthumous by Lloyd Kaufman and Lily Hayes Kaufman
Bury Them Deeper by David Sandner
These Beautiful Bones by Betty Rocksteady
Subject #270374 by C.M. Saunders
Beer Battered by K. Trap Jones
L’Amuse Bouche by Hal Bodner
Proud Papa by Adrian Ludens
Cry the Banshee by C. Cameron Rossi
TerrorSluts for Eternity versus the Ungodheads of the Interdimensionals by Allistair Rennie
We Believe in 5B by Airika Sneve
Taking Root by Christoph Weber
The Bliss Point by Wrath James White
Woeful City by Garrett Cook
Ritchie by Eric J. Guignard
I’d Give Anything for You by Edward Lee and Jack Ketchum
Hostile by Jeff Strand
Metal Heat by Jaap Boekestein
Repulsive Glamour by John McNee
The Bitch by Kristopher Triana 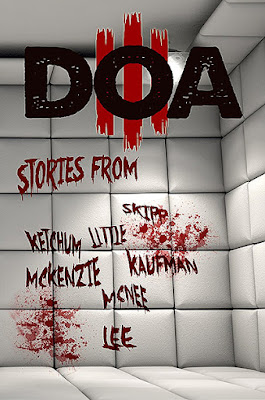